Can the measurement of critical conflicts using video analytics revolutionise the way we manage road safety and operations?

The Evolution of Measuring Crash Risk

For more than 25 years, the modern road safety profession has relied on police reported crashes to evaluate crash risk, implement countermeasures, and evaluate their effectiveness. While a great deal of excellent methodologies have been developed to make the best use of crash data, their limitations are no longer acceptable in light of the massive technological advances available today.

Relying on crash data to measure safety is ethically problematic, as it requires waiting for deaths and injuries to occur before taking subsequent action to prevent them. Furthermore, crashes are relatively rare at a given location and so require long observation periods, leading to constrained response times. Crash data are also limited due to underreporting and reporting errors.

During the past decade, the examination, testing, and use of critical conflict-based measures of safety has increased dramatically. The basic premise of critical conflicts is that these “near-misses” are more readily observable “events” than are crashes, occur in sufficient quantity (i.e. are repeatable), and are indicative of an underlying crash risk. The top of the pyramid shown represents the number of observed crashes of different severities—which are quite rare as a proportion of all traffic. Moving toward the pyramid bottom, there are increasing numbers of serious or critical traffic conflicts, lighter traffic conflicts, normal interactions between two road users, and finally, undisturbed passages. While in the past the profession has relied predominately on crash data to assess safety, we can now measure critical conflicts for reliable clues into the causes of crash risk and appropriate remedial measures. 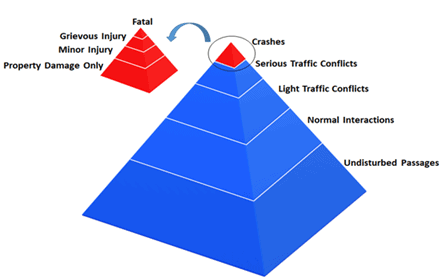 Despite an enhanced ability to measure critical conflicts, their use in managing road safety is not straightforward. The occurrence of a near-miss can be inconsequential, or extremely meaningful depending on its context. Critical conflicts are similar to crashes in this regard. A crash can indicate an underlying, fixable safety problem, or an event that is independent of infrastructure and traffic operations (e.g. mobile phone distraction).

The Complex Relationships Between Near-Misses and Crash Risk

In a recently published study[4], based on data from 49 signalized intersections in British Columbia, one of the Advanced Mobility Analytics Group (AMAG) founders established a ratio between near-misses and crashes (per year, on average) to be about 1 in 227, establishing 1) a reliable relationship, and 2) evidence of how more frequently critical conflicts occur compared to actual crashes. Important contextual factors were also identified and include traffic exposure (volumes), which are non-linearly related to conflicts, which are proportional to total crash risk. Left-turn crash risk increases more rapidly than the potential for left-turn critical conflicts, and less rapidly than traffic volume increases. In contrast, rear-end crash risk decreases with increasing traffic volume, whereas rear-end conflicts increase. In other words, it is vital to understand the non-linear relationship between specific near-misses and specific crashes, as they are unique to jurisdiction and type of crash.

The role of near-misses in crashes: A lesson from Covid-19

There are useful parallels to be drawn between COVID-19 tests and near-misses. The world has been relying extensively on COVID-19 tests (generally given to people suspected to being exposed or having symptoms) to assess the risk an individual confronts regarding serious illness or death from the COVID-19 virus. As we have learned, a positive virus test result is an inconsistent predictor of the risk of serious illness or death, with population average risk around 1 in 100. However, knowing the context of a positive test helps tremendously in assessing risk. If a test is conducted on a patient under 40 years of age, the risk is effectively 0.2%, or 2 in 1000. A positive test for patient over 80 years of age in contrast, relates to a risk of 9.3 in 100. Knowing context influences the risk by a factor of 46 (under 40 vs over 80). Other contextual factors are also vital for understanding risk—hypertension increases risk by a factor of 2.46, whilst cardiovascular disease increases risk by a factor of 3.42. Just as a positive COVID-19 test is an inconsistent and context-specific indicator of serious illness or death, a near-miss is an inconsistent predictor of crashes and requires understanding of the context.

How To Make Best Use of Critical Conflicts for Road Safety

If the road safety profession is to collect and utilize critical conflict data to improve road user safety, it is vital that a number of key learnings are carefully considered and applied:

Taking mitigative actions in response to simple counts of near-misses without understanding the underlying relationship to crashes can create misleading results, and potentially be harmful to safety. It is imperative to understand the true, fundamental nature of underlying crash risk (occurrence and severity) and its relationship to near-misses and contextual factors.

Systems that simply provide counts of near-misses to assess road safety are over-simplified … and will result in an inferior approach to managing road safety.

Toward a Safer Future

The use of conflict-based measures of safety is transforming the field of road safety and allowing us to do more, faster. This transition is long overdue; however, it is critical to stress that the accuracy, reliability, and usefulness of near-miss data relies on a robust and careful understanding of the complex relationships between near-misses and crash risks. Systems that simply provide counts of near-misses to assess road safety are over-simplified, do not sufficiently account for these complexities, and will result in an inferior approach to managing road safety. 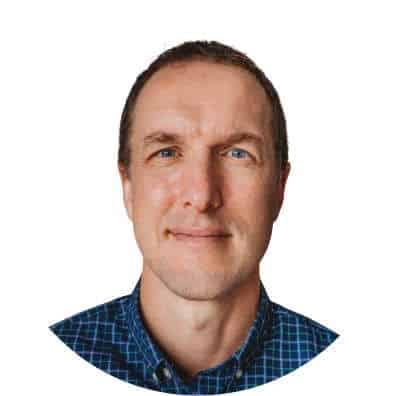 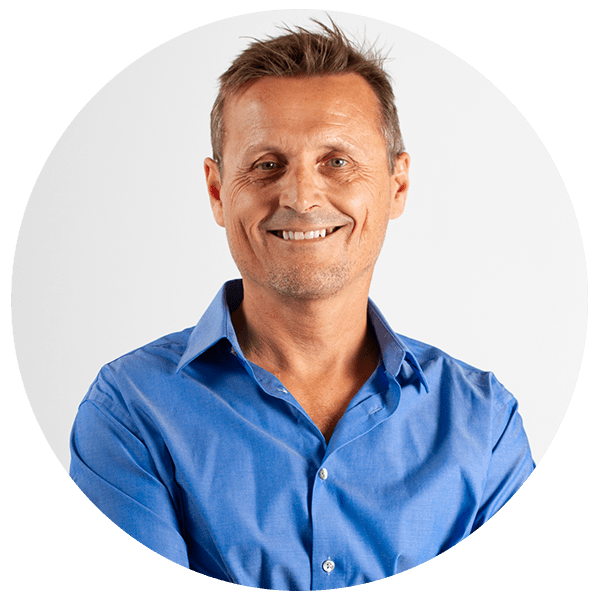