Are all traffic conflict studies equal? – How to ensure reliability

Well-known limitations with the quality of crash data and crash-based safety analysis methods is giving rise to the use of alternate measures of safety such as the presence of ‘critical’ trafﬁc conﬂicts, or near misses. The traffic conflict technique has gained considerable popularity as a proactive surrogate tool for road safety analysis . Compared to crashes, conﬂicts occur much more frequently, and as such are more readily available and provide significant advantage. Additionally, using conﬂicts for road safety analysis offers the advantage of timeliness and avoids the ethical dilemma of the need to first observe crashes to then prevent them. Finally, using conflicts for safety analysis provides instantaneous safety measures that can be used for real-time safety evaluations and traffic operations optimization. The increasing popularity of traffic conflict techniques has been aided by advances in sensor technology and artificial intelligence techniques, and several companies have been recently established to undertake traffic conflict studies using video, Lidar and connected/autonomous vehicle data. While this is a very encouraging advance for the profession, it also raises an alarming issue regarding the need for assurances or standards regarding the reliability of such systems. Any computer scientist with AI programming skills can develop a system to track when and where road users are, and even identify conflicts defined in some manner. The reliability of such systems lies in a complete understanding of the nature and proper measurement of traffic conflicts, their relationship with actual crash risk, and the proper accounting of road user behavior. Governments and consultancies interesting in transitioning to and implementing traffic conflict based techniques need to be provided with assurances that the conflict-based system is sufficiently accurate and capable of detecting true underlying safety problems, that if left untreated will contribute to future crashes.

Issue 1 - How to measure conflicts?

Generally, two dimensions can be used to measure traffic conflicts: the closeness (proximity) to a crash and the intensity of evasive actions taken by road users to avoid a crash1. Many conflict indicators have been proposed to measure conflicts, the majority of which measure time/space proximity (the degree of closeness to a crash in time and space). However, most conflict studies use a single measure, most often the time to collision (TTC) or the post encroachment time (PET). Relying on one conflict indicator to measure traffic conflicts can represent a serious pitfall. In many real-world circumstances, it is difﬁcult to differentiate between true traffic conflicts and normal changes in the position and velocity of one road user while navigating a trafﬁc stream1  This uncertainty causes conﬂict indicators to only represent a partial image of the true severity of trafﬁc events . It may also explain why time proximity indicators such as TTC sometimes may fail to capture true severity aspects of traffic conflicts.

In view of the limitation of using one single conﬂict indicator, studies have proposed to combine diﬀerent indicators to gain better understanding on the underlying severity of an event. In general, the conflict indicators used should cover three aspects, including temporal and spatial proximity, intensity of evasive action, and the consequence of potential collision[2]. An example  of using the strength of pedestrian evasive action (running, sudden stopping, etc.) to measure conflicts is shown in the Figure 1. Research by AMAG founders has shown that understanding crash risk requires the measurement of several unique conflict indicators.

Issue 2 - Which conflict threshold to use?

While the use of trafﬁc conﬂicts is on the rise, there are no well-established standards to guide their identiﬁcation and many inconsistency issues arise[3]. Traffic conflict thresholds (e.g., TTC< 3 sec) have been determined in a somewhat arbitrary way and usually vary significantly among different studies. It is often not clear why specific thresholds are used, and different thresholds can lead to completely different analysis results. Recent studies advocate selecting thresholds that generate the highest correlation between trafﬁc conﬂicts and observed crashes and to focus only on extreme conflicts. Selecting liberal conflict indicators thresholds would misclassify safe interactions as conﬂicts leading to biased safety evaluation results.
[3]Tageldin, A. and Sayed, T. (2016) “Developing Evasive Action-Based Indicators for Identifying Pedestrian Conflicts in Less Organized Traffic Environments”, Journal of Advanced Transportation, Vol. 50, pp.1193–1208.

Issue 3 - The accuracy of conflict extraction

The foundation of using conflicts to predict crash risk is built on the accuracy of the process to extract conflicts from the video, Lidar or connected vehicle data. Research has shown that only extreme conflicts are the best predictors of crash risk, and the identification of true extremes is highly sensitive to the quality of the conflict extraction process. Many conflicts act simply as a measure of traffic volumes and do not really reflect crash risk.

The accuracy of conflict extraction is very sensitive to several factors usually not considered by many. Ignoring these factors can completely bias the analysis, leading to incorrect conclusions regarding underlying safety. These factors include:

Not all systems for extracting traffic conflicts are the same and the reliability of the results needs to be established before relying on them to evaluate safety and predict crash risk. It is important to recognize that not only are several conflict indicators required to fully understand crash risk, but different crash types are related to different conflict types and with different threshold values. Furthermore, these relationships may change between jurisdictions with different traffic environments. Improperly selected conflicts and thresholds may merely be measuring the amount of traffic instead of a true underlying crash risk that can be mitigated. The conflict extraction process must also consider vehicle size, calibration of the camera (for video data), and sophisticated methods for road user path prediction. Not doing so may result in seemingly small errors that render the results meaningless.

As an emerging technology in road safety management, proactive methods will require ongoing research and development to continually refine, improve, and validate the techniques in the real world. Thus, rapid translation of this rapidly developing technology from research to practice (i.e. commercially available tools) is key for these technologies to have maximum impact, and subsequently reduce injuries and fatalities on the global transport infrastructure. 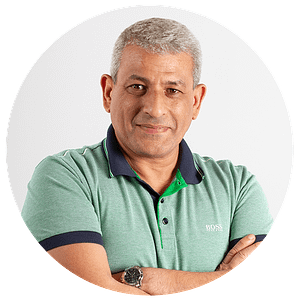 Dr. Tarek Sayed is a Co-Founder of Advanced Mobility Analytics Group (AMAG). Professor Sayed has won numerous awards in recognition of his contributions to road safety, including the UBC Distinguished University Scholar, ITE Wilbur Smith Distinguished Transportation Educator, Canadian Society of Civil Engineering Sandford Fleming, and Transportation Association of Canada  Centennial Road Safety Award,  Prince Michael International Road Safety Award and several best paper and teaching awards. He is also a Fellow of the Engineering Institute of Canada, the Canadian Academy of Engineering, and the Canadian Society for Civil Engineering.. Professor Sayed is a world-renowned leading authority in the development of video analytic methods for road safety and pioneered much of the early work in this field.