Critical conflicts can help us to predict crashes; but what do they look like?

Proactive solutions for managing road safety, delivered through tracking of ‘critical conflicts’ or ‘near-misses’ and other metrics, are being offered by a number of providers. These proactive solutions offer the promise of using surrogate measures of safety, rather than crashes, to inform and guide safety investment and management decisions, with the intent to deliver safer operations. These critical conflicts or ‘’events” are measured using generally unfamiliar metrics that are being bandied about without a clear understanding of what they really are, how they are related to crashes, and what we should expect them to ‘look like’ to the casual observer. Previous blogs have focused on what conflicts are and how we measure them. This blog aims to provide some clarity into what we should expect when observing critical conflicts.

What are critical conflicts?

It is worth first reminding ourselves of the logic behind the use of critical conflicts for informing road safety. It has been suggested that “for every passage of a motorist within the domain of a traffic facility, there is a chance set-up for a collision to take place” (Hauer). Furthermore, every road user passage can be seen as a trial with a non-zero underlying chance of failure. The precise mechanism that exposes every road user to the risk of collision is not directly observable and can only be inferred from empirical realizations in the form of road collisions or critical conflicts. However, there is no clear definition of what constitutes a trial–however, every road user traversing a section of road is a reasonable starting point. It can be argued that a genuine trial must entail a reasonable chain of events that present a reasonable chance of a collision taking place. As such, a direct way to measure exposure is by tracking conflicting road users objectively and all of the time. Without the use of a tracking mechanism (e.g. the aid of accurate, reliable, objective computer vision) to identify conflicting road users, this aspiration is very difficult at best, and infeasible at worst. 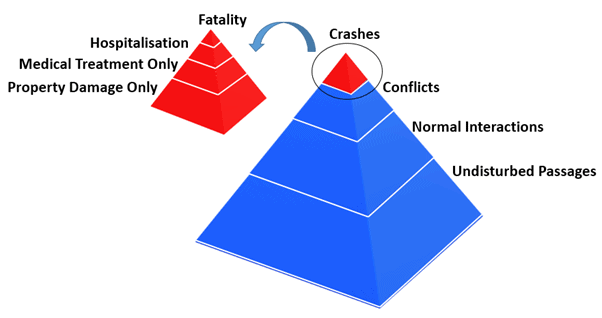 In a previous blog, we discussed how to measure critical conflicts. It is important to remind ourselves, however, how they relate to actual crashes. To understand what a critical conflict is, we turn to a familiar pyramid that represents the interactions of road users. The red tip of the pyramid represents the very small fraction of interactions where the outcome is a crash. The red portion of the pyramid represents fatal crashes that are most severe and least common, followed by serious injury crashes, minor injury crashes, and property damage crashes.

With this model of road user interactions, we can draw some useful observations that help us to understand the role of critical conflicts in understanding and measuring crash risk.

Armed with this background information, we can define a traffic event as a situation in which road users come within reasonable temporal and spatial proximity to each other. In MOST traffic events, an evasive action with adequate magnitude is undertaken (e.g., deceleration or swerving) to avoid collision. These events are defined as near-misses or critical conflicts. If the strength of the evasive action is not adequate to avoid physical contact of the interacting road users, they will collide or come to physical contact. However, problems arise due to an inconsistent definition of what “evasive actions” are and when they are commenced. In addition, it is sometimes difficult to differentiate evasive actions from normal adaptations of the position and velocity of one road user while navigating a traffic stream. As a result, it is important to recognise that some critical conflicts are easily recognisable whilst others are not.

With an understanding of what critical conflicts are, we turn now to the question of how they are related to actual crashes, or road user safety.

How are conflicts related to crashes?

In a previous blog, Tarek Sayed laid out the fundamentals for accurately measuring conflicts and how these conflicts are quantified and statistically related to crashes. In summary, the relationship between conflicts and crashes, while reliable and repeatable, is complex, requires numerous well-designed and measured metrics, and varies from city to city. Examination of this relationship is not too dissimilar to efforts focused on understanding the relationship between crashes and traffic volumes, which has been the focus of considerable research for several decades.

To understand how conflicts relate to crashes, we briefly review the statistical relationship, then focus more on the theoretical. Statistically, critical conflicts are non-linearly related to crashes. In the plot below, crashes on the y-axis increase with the number of observed critical conflicts on the x-axis, although with decreasing elasticity as x increases. This statistical relationship varies across regions, states, and countries, similar to the relationship between road user exposure and crashes–the greater the number of road users in general, the greater is the expected number of crashes. However, research has shown that critical conflicts are more reliable predictors of crashes than is road user exposure. It is important to note that this relationship between conflicts and crashes varies by crash type, conflict type, and across jurisdictions; thus, local calibration of models predicting crashes using conflicts is important (as discussed in the previous blog). 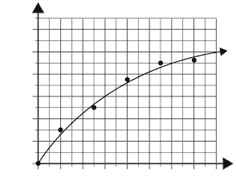 This relationship between conflicts and crashes can also be explained from a theoretical, or causal process. James Reason’s swiss cheese model of crash causation has withstood the test of time and serves as a very useful model for understanding how critical conflicts are causally related to crashes. This model, shown below, suggests that crashes (not conflicts) occur from a multiple failure mechanism, not just a single point of failure.

In general, a crash occurs when engineering controls in place fail (e.g. a driver runs a red light, lane striping becomes faded, etc.), AND administrative controls fail (e.g. scheduled maintenance failed to remove loose debris from the pavement), AND behavioural controls fail (e.g. enforcement presence insufficient to prevent speeding). The severity of the crash will also be influenced by mitigating factors (or barriers), such as the type of safety equipment in a vehicle and the eventual angle of collision. Importantly, the swiss cheese model represents a time sequence of events, whereby the subsequent control weaknesses are aligned in such a way as to result in a crash. This misalignment is quite rare indeed (the red at the top of the pyramid), and the controls in place are usually sufficient to produce mostly normal interactions among road users.

How is a critical conflict explained by the swiss cheese model? Essentially, a critical conflict represents a case where one or two of the 3 control weaknesses were revealed, but at least one control prevented a crash. To illustrate, let’s examine some hypothetical scenarios.

In these three examples, two of them involved evasive actions (heaving braking and swerving). The events involving evasive actions would be easy to detect, whereas the 2nd example may not appear remarkable in any way. What these examples share in common is they are one perception and reaction away from a crash. If driver distraction, inattention or fatigue were present, crashes would have occurred.

These hypothetical events and events like them can occur as much as 200 to 500 times for each crash, and in non-linear fashion. It is this relationship, and the ability to observe these critical conflicts, that facilitates the implementation of proactive safety methods. A ‘heat map’ that shows a large number of similar conflicts is an indicator that with time, some of these conflicts are likely to result in actual crashes.

Putting it all together: What do we expect critical conflicts to look like if we were to see or record one?

Let’s first note that what can be computed with the aid of video analytics is far more detailed than can be seen with the naked eye. Accelerations, decelerations, trajectory, speeds, and seconds to impact can be measured precisely with video analytics. Because critical conflicts can be visually saved and replayed (e.g. shown on a 10-second video clip of an intersection), many people have preconceived ideas of what they should expect to see.

Crashes are obvious to anyone who would see one, but critical conflicts are much more difficult to discern because 1) there are numerous metrics used to define them, many of which do not lend themselves to visual verification; 2) some conflicts do not involve aggressive evasive actions, and 3) it is not always obvious how ‘close’ to a crash the conflict was.

The presence of aggressive, abrupt, or ‘obvious’ evasive actions enables critical conflicts to be easily identified and/or noticed in a video clip. Squealing tires and swerving vehicles are events that stand out from the ‘normal’ set of interactions among road users. These events are unnerving video clips to observe. Indeed, if one looks at the marketing materials for providers of video analytics they will typically show a very impactful evasive action near-miss that will make you want to take your teenager’s car keys away. These critical conflicts, however, are not the norm. Such events are only a small subset of critical conflicts that are needed to predict crash risk–and other less obvious critical conflicts are equally worrisome.

The absence of aggressive evasive action in a critical conflict does not make it less powerful for reliably predicting crashes. It does, however, make the critical conflict look less remarkable from an onlooker perspective. These events can look like seemingly normal events in video clips, despite their relationship to crash risk.

So what then is a critical conflict, if it may not be easily observed? A critical conflict is a carefully screened and empirically-validated set of circumstances, that when repeated enough times, will eventually result in a crash. These critical conflicts possess a number of, but not all ‘ingredients’ that are essential for a crash to occur. The ingredients often involve things like excess speed, improper tracking (e.g. position in a curve), aggressive gap acceptance or lane changing, following too closely, and poor judgment (e.g. misjudging the speed of a vehicle, size of a gap, etc.) or execution (e.g. stepping on accelerator instead of brake).

By carefully measuring and tracking these critical conflicts, and their essential ingredients, the profession can and will evolve from relying on crashes to inform safety management. Significant work remains in refining the conflict metrics that matter most, in scaling these conflicts across jurisdictions, in measuring evasive actions, and in developing increasingly reliable metrics.